Save the Nursery Campaign

West Ham Park is a 77 acre Grade 2 green oasis in East London, hugely valued by the community it serves, but now the City of London want to build houses on part of the former plant nursery. This area could be used instead to enlarge the public area of the park. The park has been a lifeline for so many people both before and during the COVID pandemic and has always been extremely popular and very well used. During the pandemic the number of people using the park has doubled. The Friends of West Ham Park, who help the local communities gain the most from this fabulous open space in such a densely crowded area, are appalled at this proposal and intend to fight it.

History of the Park including the Nursery

The Park was purchased, at a below market price, in 1874 from John Gurney provided that it was to be held on trust forever “as open public grounds and gardens for the resort and recreation of adults and as playgrounds for children and youth”. A significant portion of the monies to purchase the Park was raised from local donations. The West Ham Park Charity is constituted as a charitable trust with the City of London Corporation as the corporate trustee.

The West Ham Park nursery is a substantial plant nursery and greenhouse area in the North East of the Park which primarily supplied plants for use by the City of London. The nursery was shut down several years ago as it was deemed by the City of London to be no longer economically viable.

As described in the Historic England Grade 2 listing the nursery pre-dates the creation of the Park where it appears to have been the kitchen garden for the stately home that was formerly located on the land where the Park now resides. The Historic England listing also suggests that the Nursery may have been used by Dr John Fothergill, the famous 18th Century plant collector, whose collection of plant species in the Park were described as “second only to Kew in Europe”.

Although the public do not currently have access to the nursery the site has never been developed and remains as green open space comprising plant beds, greenhouses and sheds. Based on Ordnance Survey maps and a post war aerial photograph between 1951 and 1971 the Nursery approximately doubled in size with new areas to the North, West and most significantly to the South. Based on the Ordnance Survey and the photograph most of the additional areas consumed into the Nursery appears to have had full public access previously.

The nursery site has always been part of the Park and is within the boundaries of the Park as recorded at the HM Land Registry and is included within the areas subject to the Grade 2 listing at Historic England.

Proposed Development for the Nursery

After significant public pressure the City of London finally revealed their preferred detailed plans for the Nursery at a public meeting held on 11 December 2019, which is developing approximately half of the Nursery into large residential blocks of flats.

Reasons Given for Development

Providing more housing in London may be viewed as a positive outcome but it should not be at the expense of losing a significant portion of the Park forever.

We held a public meting on 9th November (see link above) and will hold further meetings when more details of the City of London Corporation’s proposals are known.

Take part in Newham’s Local Plan consultation. To protect the future of the park and prevent building on the nursery site, it is very important that the consultation should reflect the communities views on the status and value of West Ham Park and the importance of the nursery site becoming public open space and not residential accommodation. See the links in the 9th November meeting page.

We have been in contact with Lyn Brown for several months and she fully supports our campaign. She has collated her letters in relation to plans to build flats on part of West Ham Park, these can be read online here. 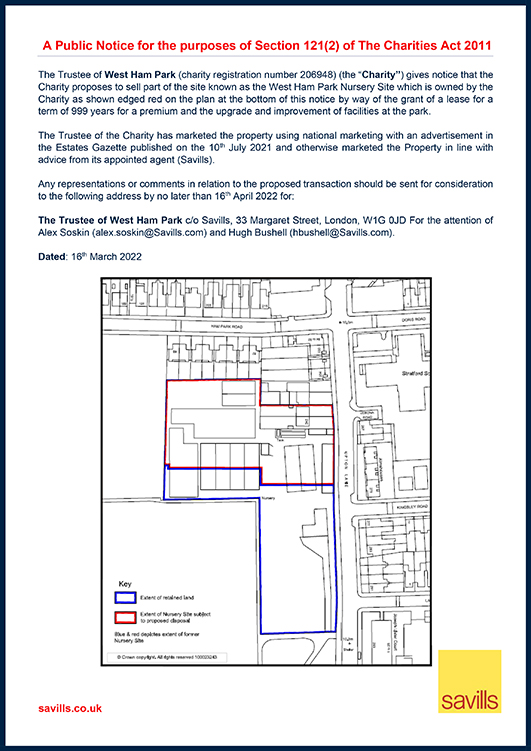 This Public Notice appeared on the gates to West Ham Park on
16 March, it details the area to be developed. Tap here to read it in more detail

Read the presentation from the online meeting 29 March 2022

Read the presentation from the online meeting 9th November 2021

2 October 2021, Newham Voices, Letters, West Ham Park: it’s there to serve us not the City of London

We use cookies on our website to give you the most relevant experience by remembering your preferences and repeat visits. By clicking “ACCEPT ALL”, you consent to the use of ALL the cookies. However, you may visit "Cookie Settings" to provide a controlled consent.
Cookie SettingsREJECT ALLACCEPT ALL
Manage consent

This website uses cookies to improve your experience while you navigate through the website. Out of these, the cookies that are categorized as necessary are stored on your browser as they are essential for the working of basic functionalities of the website. We also use third-party cookies that help us analyze and understand how you use this website. These cookies will be stored in your browser only with your consent. You also have the option to opt-out of these cookies. But opting out of some of these cookies may affect your browsing experience.
Necessary Always Enabled

Performance cookies are used to understand and analyze the key performance indexes of the website which helps in delivering a better user experience for the visitors.

Analytical cookies are used to understand how visitors interact with the website. These cookies help provide information on metrics the number of visitors, bounce rate, traffic source, etc.

Advertisement cookies are used to provide visitors with relevant ads and marketing campaigns. These cookies track visitors across websites and collect information to provide customized ads.

Other uncategorized cookies are those that are being analyzed and have not been classified into a category as yet.